Since moving back to Portland I’ve made a point of taking in the Pacific NW that I somehow forgot existed. I’ve reconnected with the beauty of my home state through a series of hikes. One of the great things about living in Portland is that it’s easy to get to a number of spectacular hiking spots in 60 minutes or less. I’ve even taken to identifying wildflowers during my hikes. Yes, I’ve become that nerdy person. Getting into nature has reintroduced me to my surroundings and has given me a new appreciation for the Pacific NW.

Along with a friend, I’ve hiked a number of spots along the Columbia River gorge, as well as in Mt. Hood National Forest and Clackamas Foothills. Ascending a mountain that overlooks the Columbia River, which I learned is one of the nation’s largest, is spectacular. The Columbia cuts through the Cascade mountains to form a deep gorge along the border between Washington and Oregon. It’s a dramatic landscape of towering cliffs and waterfalls.

Me and my hiking partner typically reward ourselves with lunch at the top of the peak we’ve hiked. We eat with an awe-inspiring view. This is where I learn about all the creative things my vegan hiking friend is doing in the kitchen. She likes to play in the kitchen and ‘veganize’ many traditional recipes. She’s also realistic about her vegan lifestyle. If she’s offered a cookie and it’s pitched to her as the best one in the world (which I recently did with my NYT chocolate chip cookie). Then she becomes a ‘cheagan vegan’ and enjoys the egg and butter-laden treat.

What I have learned from my friend is that experimenting with vegan desserts can be fun. She has shared vegan treats with me that are not only flavorful, but actually tasty. Maybe it’s eating at the top of a peak overlooking the Columbia River gorge, or maybe I’m becoming less of a skeptic about vegan desserts. You won’t find me at the local vegan bakery anytime soon, however, after tasting my friend’s peanut butter blondies, I was inspired to make them at home.

The recipe is unbelievably easy, somewhat healthy and is packed full of protein and is gluten free. It’s like a miracle treat that actually tastes good. 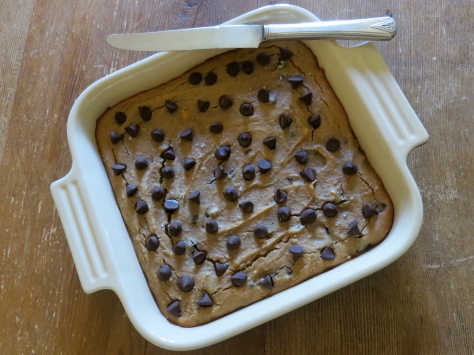 The original recipe didn’t include egg. I thought the texture was too crumbly, so I incorporated egg. If you want to forgo being a ‘cheagan vegan’ it’s simple to eliminate the egg and use chocolate chips with no dairy.

The name for this treat in the original recipe is Flourless Chocolate Chip Chickpea Blondies with Sea Salt. That’s a mouthful and kind of boring. So I decided to rename it Bean-y Blondies

Bean-y Blondies – adapted from The Comfort of Cooking blog

1 egg (can be eliminated for the true vegan)

2. In a food processor, add all the ingredients except the chocolate chips. Process until batter is smooth. Will resemble hummus.

4. Bake for 20-25 minutes, or until a toothpick comes out clean and edges are very light brown.

5. Let cool completely on a wire rack.  Cut into squares.