Circa 1987. A gawky, lanky, adolescent girl frequents El Toro Taqueria at least once a week with her mom who lives up the street on 17th and Dearborn in the Mission district of San Francisco. This was back in the days before the Mission was filled with hipsters, cool bars and top notch restaurants. In fact, it was a bit scary back in ’87. Some of my memories include my mom and I getting harassed on the way to and from the 16th Street BART station, and the big neon 500 Club martini glass sign at the corner of 17th and Guerrero represented a scary business to keep away from, not a cool dive bar with a photo booth. How the Mission has changed. 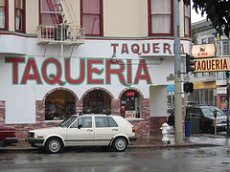 I would travel from Oregon during the summers and stay in the big city of SF with my mom, who was in culinary school at the time. During the summer of 1987 I developed a crush on a particular burrito ‘slinger’ at El Toro. I managed to convince my mom to go there for dinner frequently so I could eat a chicken burrito lovingly made by my wannabe novio. My mom knew about my crush and indulged me as much as she could afford, which was a lot, because back in 1987 the burrito prices topped out at $3.50.

Fast forward to 2008. My husband I had recently moved to the Bay Area, and I had an itching for a Mission-style burrito. My first thought was El Toro. I knew it was still around, thanks to Yelp, so we went to check it out — 21 years later. There really isn’t a substitute for SF Mission burritos. People may tell you differently, but trust me, there isn’t.

Here are the things that have changed:

Prices – 1987 = $3.50, 2008 = $8.50
Ingredients – you would never see tofu as a burrito filling in 1987.
Atmosphere – the outside and inside have been upgraded – complete with new tiles and facade.
Clientele – 1987 – my mom and I were one of the few Caucasians in the joint; mostly Spanish spoken. 2008 = lots of Mission hipsters; lots of yoga mats and bicycles.
Food – honestly, it was like taking a bite back in time. My chicken burrito tasted amazingly good. I can’t tell if it was because I was feeling nostalgic or because it was that good.

The one thing I remember that’s exactly the same are the seats. They’re the same thatched leather, backless stools that I remember sitting on as a pre-teen with my mom, trying to catch my crush’s eye from across the restaurant. Ah, to be young again.

Gentrification has changed the Mission, but El Toro still remains, for the most part, the same.

3 thoughts on “the burrito lives on”